Crossing the Tourism “Himalayas”
Scan with wechat to share

The American writer Mark Twain once said, “India is the cradle of the human race, the birthplace of human speech, the mother of history, the grandmother of legend, and the great-grandmother of tradition. Our most valuable and most instructive materials in the history of man are treasured in India only.”

One would expect India to be among the favorite destinations of travelers from China. In reality, however, India holds little appeal for Chinese tourists. Despite the fact that the world economy remains in a fragile, unbalanced recovery, international tourist arrivals still hit a record high of 1.1 billion in 2014, according to the World Tourism Organization. Europe remained the region receiving the most international arrivals. The number of tourists to the United States grew by 8 percent. In the Asia-Pacific region, South Asia saw a tourism boom. Particularly, international arrivals to India rose by 7 percent. 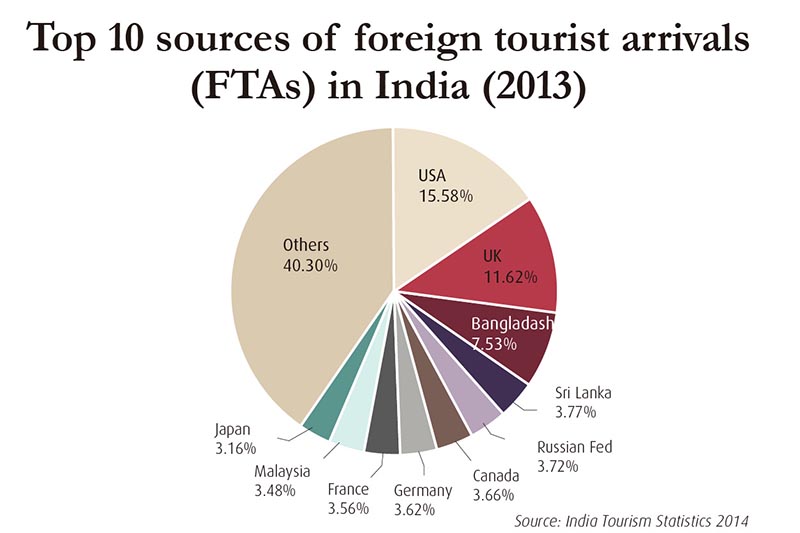 In 2014, the number of Indian tourists to China reached 710,000, while the number of Chinese visitors to India was only 170,000, according to statistics released by the China National Tourism Administration. It is estimated that the figure is unlikely to exceed 200,000 in 2015. Compared to the total number of Chinese outbound tourists – estimated at 135 million this year – the number is negligible.

Although China and India have, in recent years, deepened cooperation in various fields, personnel exchanges between the two countries remain very limited. Both nations are eager to strengthen their mutual communication and understanding. During President Xi Jinping’s visit to India in September 2014, the Chinese president and Indian Prime Minister Narendra Modi reached a consensus to launch the “Visit India Year 2015” and the “Visit China Year 2016,” aimed at promoting tourism cooperation and personnel exchanges. 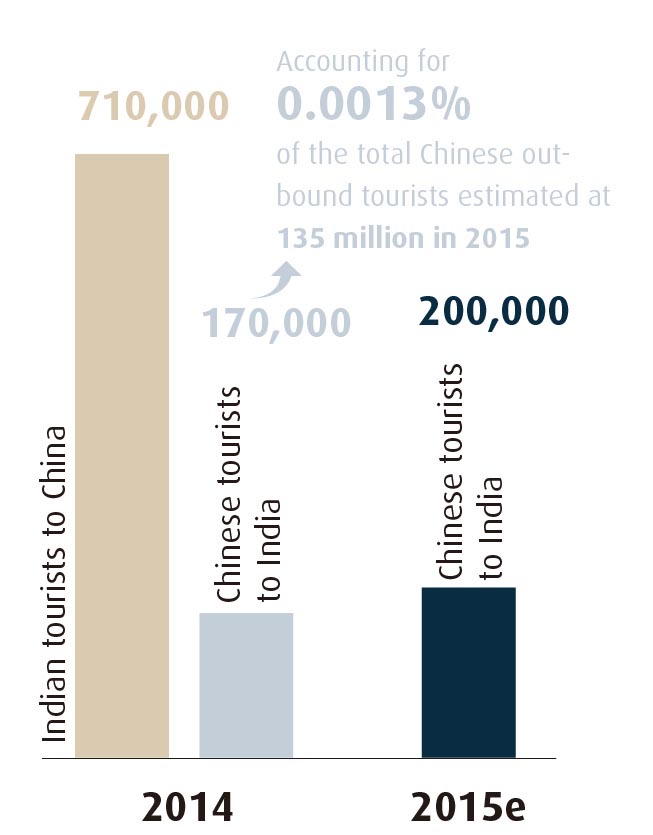 Usually, a country’s tourism development is closely associated with its economic development. In the first decades since its national independence in 1947, India witnessed slow economic growth. Not until 1991, when India launched its economic reforms, did the country walk onto a fast track of development. Today, India is one of the world’s fastest-growing economies. However, its overall development, especially in the realm of infrastructure, remains underdeveloped, which limits its tourism potential. Some Indian officials acknowledge that poverty is the biggest challenge for India. Obviously, those who struggle under the poverty line cannot afford to travel.

India lags far behind China in terms of infrastructure. By 2012, China had built expressways totaling 96,000 kilometers, ranking first in the world. To date, the total length of India’s expressways is only a little more than 1,000 kilometers. Four of the world’s busiest airports are in Asia, of which Beijing Capital International Airport ranks second. In contrast, none of India’s airports is in the world’s top 10. By 2014, China had put into operation high-speed rail lines totaling 16,000 kilometers, ranking first in the world, while India’s fastest railroad is the 195-kilometer New Delhi-Agra Railway, with a designed highest speed of only 160 kilometers per hour. India’s underdeveloped transport infrastructure is hindering the development of its tourism sector.

In addition to “hard” bottlenecks such as underdeveloped infrastructure, there are also a number of “soft” obstacles that hinder the development of cooperation between China and India in the tourism sector. From India’s perspective, the image of China is basically “negative”. After a transient “honeymoon” period after the two countries established diplomatic relations, China and India soon fell into a border dispute in 1962. Afterwards, Indian politicians and media organizations have often used phrases like “traitor of friendship”, “invader of India’s territory”, “corruption” and “extreme disparity between the rich and the poor” to describe China, resulting in a negative stereotype about China in the minds of Indian people. Amid heightened nationalism, the Indian media’s comments about China are full of anxiety and doubt.

Many Chinese business travelers complain that it is very inconvenient to apply for Indian visas. In February 2015, Indian Minister of Finance Arun Jaitley announced the extension of visa-on-arrival to citizens of 150 nations, but China was not among them. During his trip to China in May 2015, Indian Prime Minister Modi declared that India would offer electronic travel authorization to tourists from China. But India is yet to add China to its visa waiver program.

China’s outbound visits surpassed 100 million last year, but only a small portion went to India. Statistics show that 67 percent of China’s outbound tourists are below 35 years of age. When choosing travel destinations, they will take into account many factors, such as scenic spots, climate, transport, catering, language, cost and culture. With the development of urbanization and urban culture in China, many Chinese urbanites have already gotten used to modern city life. Except for those who are crazy about India’s exotic religious culture, most Chinese tourists may feel a little uncomfortable in the dirty, disorderly environment of some Indian cities. This is a primary reason why Chinese tourists are not in favor of India when planning their trips.

For Chinese tourists, India isn’t an unfamiliar country, but it is a place that is hard to access. On February 2, 2015, Chinese Vice Premier Wang Yang and Indian External Affairs Minister Sushma Swaraj together kicked off the “Visit India Year 2015” initiative in Beijing. During his visit to China in May 2015, Prime Minister Modi placed the promotion of China-India economic and trade cooperation on the top of his agenda. An important purpose of Modi’s visit was to promote India’s tourism so as to reduce trade deficits. On May 15, 2015, Chinese Premier Li Keqiang and his Indian counterpart Modi attended the signing ceremony of the “Agreement on Tourism Cooperation” between the China National Tourism Administration and India’s Ministry of Tourism, at the Great Hall of the People in Beijing. The two sides expect to increase the number of mutual tourist visits from 880,000 in 2014 to 1 million in 2016.

In the future, China and India should work hard together to promote their cooperation in tourism. The tourism and culture authorities of the two countries should strengthen communication and exchanges to promote their cooperation in tourism. India’s Yoga, dance and religious culture are very attractive for Chinese tourists, while Indian tourists are highly interested in China’s historic sites, cities and scenery. Bollywood productions are popular among Chinese, and China’s filmmaking industry is also on the rise.

If Chinese and Indian filmmakers shoot films in each other’s country more frequently, people of the two countries can better understand each other through their productions, thus stimulating interest for tourism and travel. In addition, China has rich experience in infrastructure construction, as well as strong capacity and willingness to invest overseas. Chinese enterprises may invest in India’s tourism infrastructure projects such as hotels, transportation, recreational facilities, and fitness and health resorts. Media organizations of both sides should also better understand and depict the respective countries in a more objective and fair manner, so as to deepen mutual understanding between Chinese and Indian people, as well as create a friendly atmosphere for the two sides to enhance cooperation between both governments and peoples.

The author, Dr. Liu Jun, is Associate Research Fellow at the School of International Relations of Yunnan University.