If we turn back the clock today and look back 300 years, we will find that India and China, at that point of history, accounted for over 50 percent of global Gross Domestic Product (GDP). They were the main sources of technology and ideas for the world. Today, these two civilizations have shown tremendous resilience. They are now, once again, important centres of economic growth and innovation, emerging as leaders in Asia.

India and China are currently two of the largest and fastest-growing emerging economies in the world. Both have made considerable progress in improving the lives of their citizens over the past couple of decades. Today, economic engagement forms an integral component of the overall relationship, and is set for exciting expansion due to proactive measures being taken by both governments.

Since the turn of the century, trade between the two countries has attained rocket speed. India’s exports to China have soared from just over US$500 million in 1999-2000 to almost US$15 billion in 2013-14, increasing by a multiple of 30. The surge in Chinese exports to India has been even faster, from US$1.3 billion to US$51 billion, and China has emerged as one of the top trading partners for India. Today, economic engagement is immensely diverse, dynamic and vibrant, with new sectors being added continuously, including renewable energy, telecommunications, and media and entertainment. 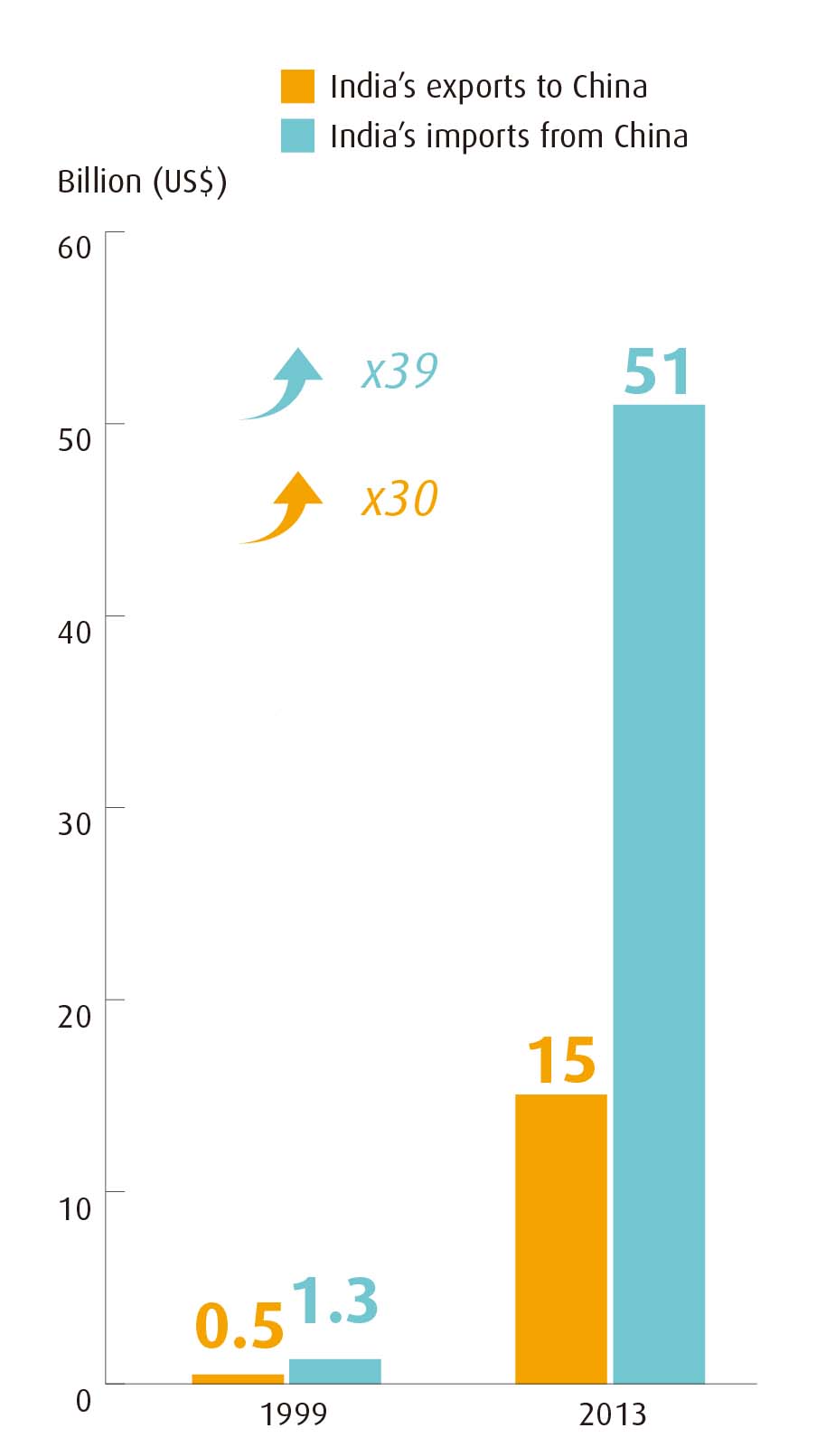 In fact, the economic partnership has been the most potent instrument in driving the bilateral relationship, facilitating progress in actualizing the strategic partnership. However, given the size of both economies and their global engagement, we have only tapped the tip of the iceberg. Investments, in particular, can reach much higher levels in both directions, across all sectors and provinces of the two countries. Witnessing the strong interest on both sides, as companies increasingly set up facilities in each other’s countries, we believe that the investment quantum is slated to jump from the current stream.

It is in this light that the Confe­deration of Indian Industry (CII) has outlined a four-point action plan to strategize and prioritize the trade and economic agenda between the two countries. The needs of the two economies are complementary. To move towards a win-win partnership, CII has suggested four measures to balance trade. The CII report on “Accelerating Indo-China Eco­nomic Engagement” notes that Chinese imports have grown sharply relative to Indian exports, resulting in a record deficit of US$35 billion in 2013. Latest figures released by India’s Depart­ment of Commerce reveal that the trade deficit has expanded to US$48 billion in 2014-15, more than four times India’s total exports to China 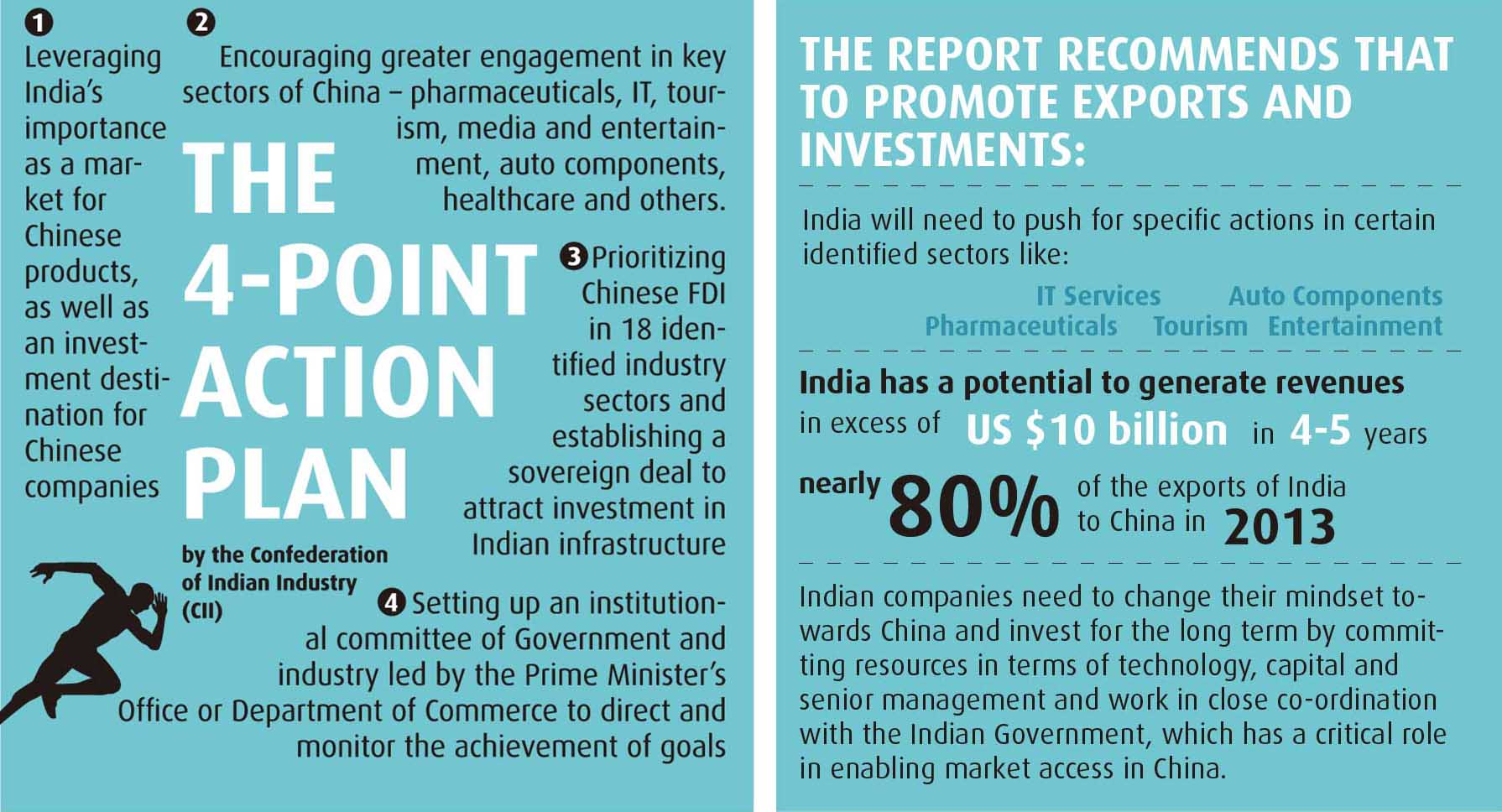 The four-point action plan includes: Leveraging India’s importance as a market for Chinese pro­ducts, as well as an investment destination for Chinese companies; encouraging greater engagement in key sectors of China – pharmaceuticals, information technology, tourism, media and entertainment, auto components, healthcare and others; prioritizing Chinese FDI (Foreign Direct Investment) in 18 identified industry sectors and establishing a sovereign deal to attract investment in Indian infrastructure; and setting up an institutional committee of government and industry led by the Prime Minister’s Office or Department of Commerce to direct and monitor the achievement of goals.

The report recommends that to promote exports and investments, India will need to push for specific actions in certain identified sectors like IT services, pharmaceuticals, auto components, tourism and entertainment. Across these targeted sectors, India has the potential to generate revenues in excess of US$10 billion in 4-5 years; that is, nearly 80 percent of the exports of India to China in 2013. Indian companies also need to change their mindset towards China and invest for the long term, by committing resources in terms of technology, capital and senior management, and working in close co-ordination with the Indian Government, which has a critical role in enabling market access in China.

In order to promote Chinese investment in India, the two countries have agreed to set up two industrial parks for Chinese manufacturing companies. Indian industry believes that this would be the right way to step up manufacturing investments in India, and help Chinese companies leverage our cost-competitive environment and skilled workforce. This also works well with the government’s overall objective to promote the manufacturing sector in India.

However, these need to be prioritized in sectors which are mutually beneficial, such as power equipment, industrial machinery, apparel, footwear, and Active Pharmaceutical Ingredients (APIs) and intermediates. Specific propositions need to be thought through to attract Chinese investment in these sectors. The states will play a crucial role in this process. The infrastructure sector is another area where India and China can work together. China has about US$ 3 trillion in accumulated foreign exchange reserves which are mostly invested in United States treasury bonds and some European Union bonds. Even if a small fraction of that amount were to be invested in long-term infrastructure financing bonds in India, with an assured rate of return in RMB over a 20-plus year period, it would alleviate the resource crunch being faced in this sector.

India has emerged as one of the key markets for China, growing at a faster rate than most of the other key trading partners, except Vietnam. Today, India’s imports from China continue to be dominated by high-skill and technology intensive manufactured products, while exports continue to be dominated by primary commodities. On the investment front, close to 100 Chinese companies have established operations in India. These companies operate in diverse sectors, ranging from iron and steel to electronics, IT and hardware manufacturing. How­ever, this is far below the potential: investments from China in India total less than US$900 million, between April 2000 and February 2015.

China, in turn, has presented itself as a good location for business for Indian IT companies. Several Indian IT companies have invested in China to cater to their clients in the Asia-Pacific region. Indian manufacturing companies, especially in the automotive sector – both in the Original Equipment Manufacturer (OEM) and component space – are investing in China to take advantage of the large domestic Chinese market.

In addition, CII believes that we must look at promoting services exports from India such as tourism, media and entertainment, and others. In fact, the recent agreement for co-production of films is a breakthrough initiative. There is also a need to promote Chinese investments in India in select sectors which have high import dependency from China. China has set up manufacturing bases in countries like Malaysia and Vietnam, and can explore similar opportunities under the Indian Government’s “Make in India” programme. CII has participated in several business events in China to build awareness on the “Make in India” initiative, and we are encouraged by the strong response from the Chinese side.

CII has undertaken events to promote more awareness in India on doing business with China, particularly in lower-tier and smaller industrial hubs of India, and also organized business networking meetings in China. We have found that information asymmetries and language issues inhibit Indian exporters from tapping opportunities in China. The recent CII book India and China: To­gether Forward outlines the successful experiences of both Indian and Chinese companies in each other’s markets and serves as a useful reference point for Indian companies.

Some common challenges faced by Indian industry relate to preferences given in contracts to Chinese State-owned Enterprises (SOEs). Challenges in staff mobility due to “hukou” (household registration) systems mean that local offices have to be set up in each location of business. In the pharmaceuticals sector, Chinese companies are better able to manage regulatory processes, and India’s penetration is low. There is a long registration and approval process. Indian companies must focus on specific molecules with low competitiveness intensity in China, such as cancer drugs. There is also huge opportunity for Indian companies in the media and entertainment sector, in areas such as pre-production and post-production of movies, co-production of movies and animation, among others.

There is some light at the end of the tunnel. President Xi Jinping’s visit to India in September 2014, during which the two countries declared a “closer developmental partnership”, promised commercial agreements worth about US$20 billion. This is a big leap from the current Chinese investment presence in India of less than US$1 billion between the year 2000 and February 2015. China would step into areas such as railways, sustainable urbanization with pilot projects to be worked out in both countries, and industrial parks. There is interest in India’s high-speed rail project, railway station modernization and the “Smart City” initiative.

Prime Minister Modi’s visit to China in May 2015 went a step further, and laid the foundation for an “Asian Century” as envisaged by the leadership of our two countries. New opportunities have emerged for industry following the visit. It is the right time for Chinese companies to seize this opportunity and look at India as a business destination. We firmly believe that as the two countries progress on their development paths, the mutual cooperation of our entrepreneurs will be a key ingredient in the overall bilateral relationship.

The author, Chandrajit Banerjee, is Director General of the Confederation of Indian Industry (CII).