Rethinking Role of Village Teams
Scan with wechat to share

What role and functions should development experts and officials perform in poverty reduction? This is a question haunting various poverty alleviation and relief organizations. In its practice of implementing precision poverty relief, the Chinese government has dispatched some 480,000 officials to 125,000 poor villages around the country to help locals shake off poverty. The move, based on the advantage of China’s political system, is considered an effective approach in poverty reduction. It not only reinforces government investment, but also increases human resources for fighting poverty. The results of the policy, as well as problems arising thereby, merit reconsideration.

From Government Official to Village Ambassador

The Poverty Relief Team in Lianhua Village, Huajiang Town, in southwestern China’s Guizhou Province, has set a good example. The head of the team, Zhou Qibing, was formerly an official in the Immigration Bureau of Anshun City. The bureau is a “pairing assistor” of Lianhua Village. In 2011, Zhou was sent to the village as head of the Poverty Relief Team. “Pairing assistance” is a poverty relief mechanism unique to China. The mechanism links government departments and state-owned enterprises (SOEs) with specific poverty-stricken villages and defines the poverty reduction obligations and objectives of those government departments and SOEs. Through sending officials or employees to their pairing villages, the government departments and SOEs can learn of the different demands of different villages, thus realizing precision poverty alleviation.

Whether an outsider can be accepted by local villagers as their leader depends on whether he or she can bring them tangible benefits. When Zhou arrived at Lianhua Village, some farmlands of the village had been rented to outside investors at low prices to plant pitayas. Zhou believed that renting their farmlands was unhelpful for villagers to increase their incomes and could even impede sustainable development of the village. Then, he organized locals to form a farmers’ union to plant and sell pitayas by themselves.

Villagers faced three major challenges. The first was lack of funds for initial investment. As a government official, Zhou is familiar with supportive policies for farming. Thus, he represented the village to apply for funds from local agriculture authorities, which were used to support villagers in pitaya planation.

The second challenge was the lack of distribution channels. Poor transport conditions blocked products of the mountainous village from reaching the outside market. Dealers would have come to the village to purchase pitayas if the road linking the village and the outside world had been better. Rebuilding the road required a large investment. Zhou helped raise the funds through three channels: supportive fund from the Immigration Bureau, supportive fund from the government, and funds from among the villagers.

The third challenge was to build a cooperative mechanism which would enable poor households to benefit when the project succeeded and reduce risks and loss when it failed. Thanks to Zhou’s effort, the village established a farmers’ union, in which poor households pooled their farmlands as shares and rich households invested funds as shares. Moreover, the union’s profits were used to ensure incomes to poor households, and then investors and, lastly, the village as the whole.

Within the “pairing assistance” mechanism, the Immigration Bureau is obligated to aid the village, but the amount and its utilization should conform to the development plan provided by Zhou. Thus, Zhou played the combined roles of leader, coordinator, and resource mobilizer. His development plan, as well as his planning and execution capacity, won recognition from local villagers. Though an outsider, Zhou became an ambassador and poverty relief leader of the village. Zhou spent five years helping the village reduce poverty. When he left, villagers entreated him to stay and help them realize a better future for the village.

The case of Lianhua Village indicates that relief team leaders play a role different from that of development experts in many international aid projects.

First of all, the head of a poverty relief team has greater flexibility in formulating special poverty alleviation measures according to villagers’ demands and his or her personal understanding of the village’s situation. For instance, Lianhua Village once planned to relocate its extremely poor households from the remote area with harsh living conditions to a better area. Through field surveys, Zhou realized that except for poor transportation, the area inhabited by the poor households was rich in exploitable natural resources and, hence, migration was not the best way to rescue them from poverty. Eventually, those households didn’t migrate from their homes, but gradually got rich through growing the plum.

Second, few development experts have an impact on the power structure of the poverty-stricken villages where they work. However, residents of Lianhua Village re-elected the director of their village committee – partially due to the effort of Zhou. In China, village committee election campaign is held every three years. Unlike rich villages, the capable elite in poverty-stricken villages would rather start their own business than get elected as village officials. To end its poverty, the village needs a capable leader. Zhou mobilized a villager surnamed Huang to run for director of the village committee, who finally won the election. While assisting the village to achieve development, Zhou took solid action to realize the villagers’ aspirations, instead of simply seeking their suggestions.

Third, in international aid projects, community-level experts and officials are responsible merely for implementation. Few of them participate in fund-raising. However, usually, the relief team head raises the funds needed for the development of the village where he or she works through his or her social relations. In fact, his or her ability to raise funds or solicit supportive projects is an important indicator for villagers to judge whether he or she is qualified. Asking help from the government department or SOE that sent him or her to the village is the most direct way to get financial support. Applying for funds from local relief authorities is also an important way. If a village’s relief team leader is powerful and capable, the village may be given priority in fund allocation.

A major reason why Zhou won recognition from the villagers is that he helped Lianhua Village get funds for many projects, including for planting cash crops, building roads, and constructing a square to meet the demand for a cultural space.

Presently, the overwhelming majority of poverty-stricken areas in China receive adequate food and clothing. Therefore, the major challenge isn’t raising grain yield for subsistence, but increasing their incomes. That means poor laborers in rural areas must enter the market. Due to bad transportation and inadequate information channels of poverty-stricken areas, however, they lack necessary information, technology, and fund. Their experience and knowledge are unable to help them handle problems such as how to enter the market and how to further develop in a market economy. In this context, it is difficult for the poor to find their development path if we only stress on participation and empowerment.

In fact, only a small proportion of China’s 125,000 village relief teams achieved success as Lianhua Village did. From the 1980s, governments at various levels began sending officials and volunteers to help poverty-stricken villages formulate development plans and carry out development projects. Like development experts from international organizations, many of them didn’t succeed in poverty alleviation. Some promoted development of local industries, but those industries proved unsustainable; some raised funds to launch “vanity projects” that appeared generous but turned out to be unhelpful for development of the local economy; others did little to reduce poverty, and passed the time waiting for the end of their tenure. Against such a backdrop, the relief story in Lianhua Village can provide us with some new experiences.

First, the barrier between external development experts and community members, as well as that between external knowledge and indigenous knowledge, in poverty aid projects should be removed. External development officials and experts need to shift their role and become ambassadors of the poverty-stricken villages they work in and fully participate in local public affairs. The shift, on the one hand, is based on personal willingness and effort, and on the other hand, needs recognition from villagers. Nevertheless, the process is time-consuming and depends on their personal ability.

Second, unlike experts from international aid organizations, an excellent relief team leader usually has many years of working experience in poverty-stricken villages. Moreover, some international organizations often limit the term of the experts hired to implement aid projects in poverty-stricken areas, in order to reduce costs. Their limited time prevents the experts from making a required role transformation. Members of Chinese poverty relief teams are required to work for at least one year on a single precision poverty alleviation project. During the period, they must stay for at least 20 days a month in the villages where they work. This may help them make role transformation.

Third, in order to become a village’s poverty relief ambassador, one needs to not only stay long enough in the village, but also to have strong abilities. When international organizations recruit project officials and experts, their educational background and work experience are the main factors considered. However, this cannot guarantee that those candidates are capable of working on poverty relief projects. The Chinese government has realized that sending capable and responsible officials to poverty-stricken villages is an effective way to make a good use of resources and achieve precision poverty alleviation. Moreover, the performance of the officials in poverty alleviation becomes a factor influencing their future promotion.

Finally, if a government department is assigned the task to help a village reduce poverty, it will be obligated to not only send a poverty relief team to the village, but also to provide effective support if needed. In this context, the government department will accord priority to the village when allocating resources under its jurisdiction, and mobilize its auxiliaries to provide as many resources as possible for poverty alleviation. Therefore, when poverty-stricken villages choose their pairing assistors, institutions at higher levels and with greater power in resource allocation are preferred. A successful poverty relief mechanism should combine personnel and excellent resources, thus helping poor villages to end poverty.

The author is a research fellow at the Center for Rural Environmental Social Studies in the Institute of Sociology, Chinese Academy of Social Sciences (CASS). His research interests include rural development and rural environmental protection. 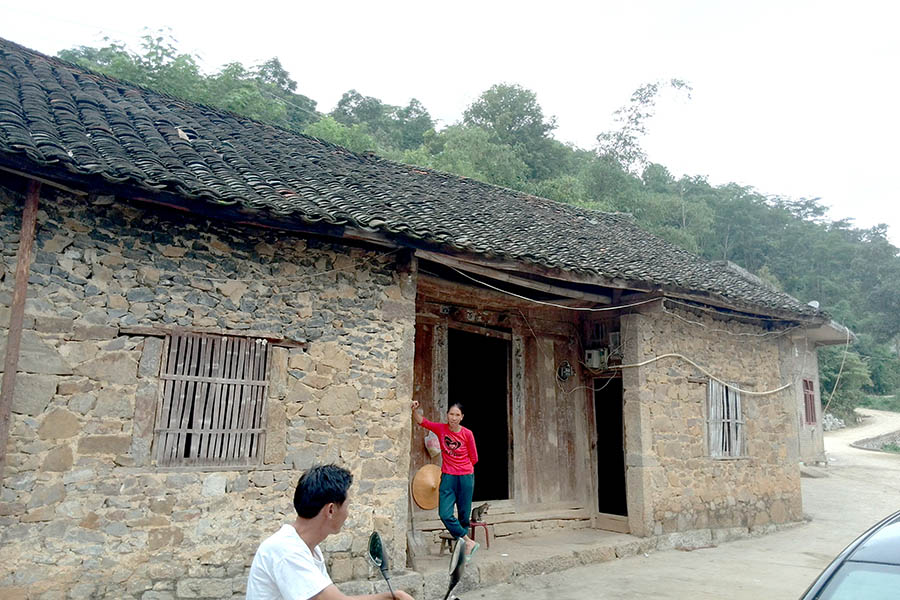 Lianhua Village is located in Huajiang Town, Guanling Bouyei and Miao Autonomous County, in Guizhou Province’s Anshun City, about 300 kilometers southeast of Guiyang, capital of the province. The village includes Shaoshang and Nongpao villages, with a total area of 19.5 square kilometers. As of 2014, the village had 14 villagers’ groups of 536 households with a registered population totaling 2,633, including 873 from 290 families who worked as migrant workers elsewhere. Out of all the local residents, 580 graduated from junior high schools, 123 from senior high schools, and 54 received college or higher education. Eight local families – a total of 28 – were deemed as extremely poor households.

The village has nearly 285 hectares of farmlands, at an average altitude of 750 meters. The area has a subtropical monsoon climate, with an annual average temperature of 16.2oC and an annual rainfall ranging from 1,205.1 to 1,656.8 millimeters. Its soil is suitable for growing cash crops rather than cereals. The poverty of Lianhua Village is primarily attributed to three causes. First, more than 540 square kilometers of Guanling County’s territory, including Lianhua Village, are suffering from rocky desertification. Such geological conditions are unsuitable for growing grain crops; and, at the same time, local villagers lack technology and fund to grow cash crops. Second, the village suffers from extremely poor transport connection despite an expressway nearby. Finally, lack of education and expertise for better-paid jobs drove most villagers to make a living through manual work in cities.

Published in the ISSUE 3 of CHINA-INDIA DIALOGUE